IT Service Desk – Is It Just A Job Or A Possible Career Opportunity?

Anastazja Michalak 24 March 2019 PM Articles
HomePM Articles IT Service Desk – Is It Just A Job Or A Possible Career Opportunity? 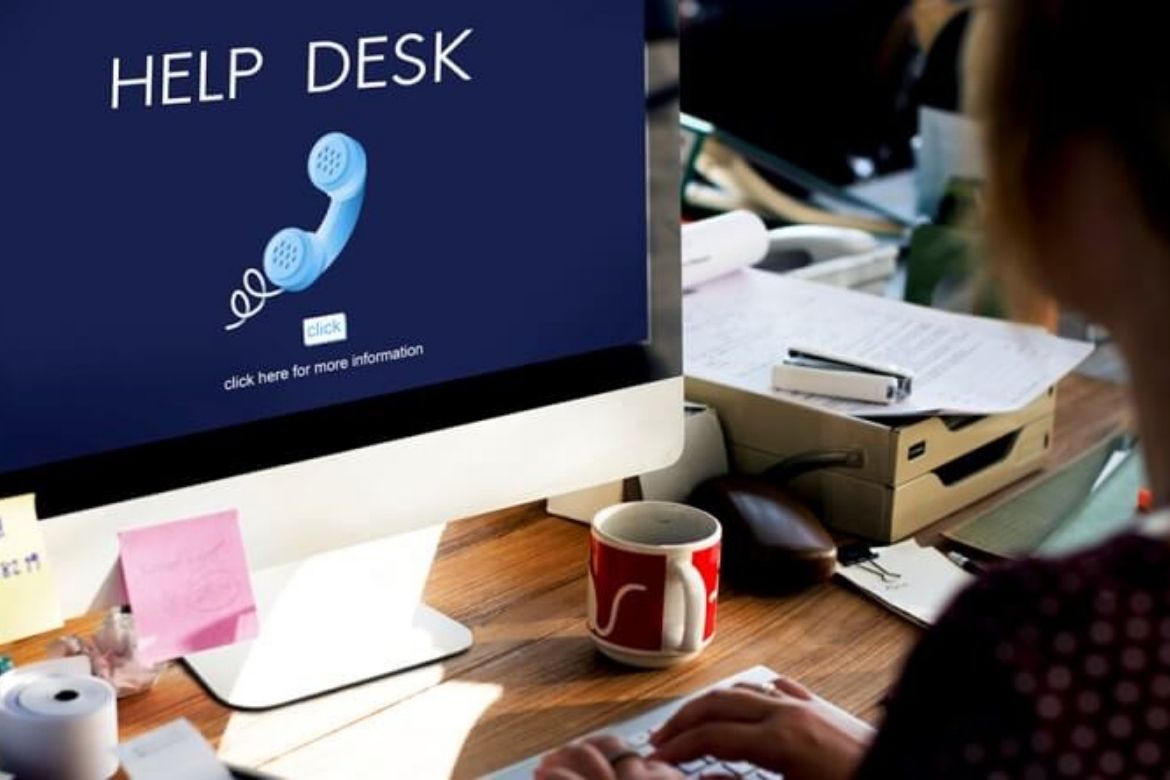 How many of you have heard this phrase when you called a helpdesk: “Hello! How can I help you?”? There are many companies that offer such customer support via phone in the catalogues of their services.  IT industry is one of them too. I am not familiar with other branches, but I may assure you that IT offers one of the greatest variety of career options which actually can make a difference in your life. Let’s find out why.

1. 7 reasons to work at service desk

Is it worth starting with Service Desk jobs in IT if you have no profile IT education? I would give you a couple of reasons why YES:

2. Reason behind writing this article

I was recently browsing through content in the community Facebook group where I saw a post of a girl who was looking for a job. I rarely participate in discussions like that, but what drew my attention was the fact that the girl was with the same background as mine – a master degree holder, a teacher with 2 languages. She wanted to know what job could be available for her if she decided to undergo a career change.

I had the same story, with the only difference that job found me, not that I was looking for it. I also hold a master degree in 2 languages: German and English. I used to work as a teacher and I was pursuing a change. I advised her to look for jobs such as IT service desk advisor/agent, 1st line support engineer in various IT companies (I gave her a few names).

Interesting comment came afterwards from an IT guy to that post. He wrote, that it is impossible to work at such positions without any proper education and he pointed out that, probably, I didn’t know what I was talking about. He also assumed I had no idea about IT branch. Interesting… who else would be able to talk about such work if not the person who had the firsthand experience and started from zero in IT, without IT education and worked for a whole year as  1st line support engineer at service desk? 😉

3. My first steps in IT branch

I did not consider IT as a possible branch for employment for myself and had this narrow-minded outlook, that if you don’t have a profile education – you will not be able to get a job in that sector. Honestly spoken, I believe this is the greatest mistake to think this way in the first place.

I had no idea about IT and did not consider myself even close to that branch (philologist and job in IT – oh, please!). I could not even install a software driver on my own computer and my resume contained a one line description about my IT skills – “general PC knowledge and basic Microsoft Office”. It still makes me smile these days when I look back at it 🙂 . I believed IT education was mandatory if you wanted to work in that sphere. I think that this belief came from a lack of understanding of how work in IT actually looks like.

The recruiter found me on LinkedIn. I was provided with a general description of the job and asked if I wanted to participate in the recruitment process. And I decided to give it a try. Why not?

My major skills were languages (German and English) and believe me or not – this is the skills I was hired for. I had 3 interviews: the 1st one – to have a general introduction between me and recruiter, the 2nd – with a hiring staff member to check my language skills, and the 3rd – technical interview, which was specific, because I was asked basic computer related terminology in different languages.

The recruiter provided me with some general hints what I could have expected during the technical interview. It was very useful, as I was able to prepare better for the interview. I made it simple – I asked a friend of mine to deconstruct a PC and show me its parts, what is consists of and how major components interact. I also refreshed my knowledge about the computer terms in respective languages. I was ready for the final technical interview and I did it! It went successful and I got the job offer.

I can’t even describe how happy I was to be given an opportunity to start something absolutely new, it meant a very great deal to me! I had no friends or acquaintances who worked in IT branch before and I was blind in understanding what is behind that job. So it was a risk, but you know how they say…

He who doesn’t risk never gets to drink champagne.

Actually, I believe IT companies are giving people a great opportunity to learn and develop, they give people second chance to start again. This is cool!

4. What does it look like to start work in IT?

First of all – I think it was the greatest experience in my whole life, however difficult it could have been. And I am very thankful for that. I am specifically thankful to the company I worked for, as it gave such opportunity to me and actually made a great impact on my development.

I was provided with a schedule from my employer: when and where we start, what to bring, how to get to the place. There were many people who started on the same day – around 10-15 people from different countries, backgrounds and knowledge. The first days in the company were strictly on-boarding. We were divided into groups and distributed in classrooms. We were given computers, instructions about company policies and regulations (security, health insurance etc). Trainings were scheduled for each group for the upcoming couple of weeks which we had to attend and make sure we completed all of them. This was a must. Nothing difficult, I would say rather interesting. As I learned later, after changing couple of jobs – this is a standard procedure in almost all corporations.

After the introduction sessions, the new hires were distributed to respective teams and projects, who raised the demand for new hires. I joined a German project. My new team was awesome, I mean it. All young girls and guys, they spoke perfect German and many of them used to be philologists in the past too. I was a little bit surprised by that, as I thought I would be the only one with such a background.

My team manager has assigned a mentor for me. I did not know the job specifics, so I needed someone to learn from about what I was supposed to do. No one pushed me to take calls from customers and solve their computer or application issues immediately after I was assigned to the project. First I had to get familiar with the rules, processes and tools, do job shadowing (when you sit next to the more experienced colleague and learn how to deal with things). Only after about a month I was ready to become a service desk agent who was ready to perform the actual job by myself.

It was not a rock science and I understand now why language skills were more important than technical skills. You can learn all those technical troubleshooting steps very quickly. There was absolutely nothing too complicated, that you cannot fix or figure out with teammates.

5. What to expect as a service desk agent?

The service desk agent job role, as I would describe it, would look like as following:

Another thing you need to be aware of is that the job of the service agent can be performed in shifts. I had experience with various situations. For one customer I was doing the support in 3 shifts. That was the case when I accepted the job offer without deep back ground knowledge on the job. I had to work on some days from 6 am until 2 pm, on some – from 2 pm until 10 pm, on some (sometimes in a row) from 10 pm until 6 am.

I must admit it was very difficult for me, because there was no stable schedule and I could not get used to not sleeping at night. And you know, I also wanted to enjoy time after work, meet with new friends, study, go to exercise – and I was not able to make it regular due to regime change. I have never had experience to work nights before in my life. So this is a challenging part.

On another project where I was transferred to – there were no more shifts, but work time differed between 7 am – 10 am and 3 pm – 6 pm. I was already supporting in 4 languages (Russian, English, German and sometimes Polish). At that project there was much bigger workload. I basically had a scheduled time for lunch (you cannot go whenever you want) and I sat non stop on calls – picking up calls from customers and resolving their IT problems.

It was again a great but difficult experience, as the scope was bigger and issues for resolution became more complicated. You really need to train your soft-skills, as otherwise it might be challenging to handle all stress. For me personally it was difficult to get the technical things – I mean REALLY technical, as it was already going deeper in details. I used to ask my great colleagues for support, for guidance, so communication was doubled. Especially when guys had a lot of their own job to do.

You should know that service desk job is considered as one of the most difficult/stressful jobs along with couple of others: You can read about it HERE.

The things you will learn as a service desk agent are not a rocket science. Many of them you will never use in real life. For me, now as a project manager, I see that it was a very valuable experience, which actually formed my understanding of IT and gave me a push to want more. It also helped me to develop other skills like: communication, stress-resistance, soft-skills, managing a lot of tasks and many others. This was all interconnected and interdependent.

I hope my experience will help you to become more open to IT branch and its opportunities, will show you that there are no “closed doors” and anything can be learned and mastered. Do not be as doubtful as that guy from the Facebook group. Did you already start considering career options? It’s not what you preach – it’s what you tolerate. 10 laws of effective meeting culture. 4 Colors of the Project Manager – Choose Yours to Fight Deadlines

50 Shades Of Project Manager: Things I Wish I Knew When I Started My Career

This website is all about finding useful insights about Project Management.
Discover with me amazing books to read and peek into the daily life of a PM.